What I Did Last Summer 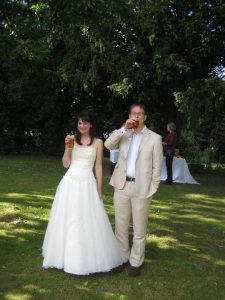 This summer has been something of a busy one. As well as getting married and moving to Oxford, I also got to see an early showing of the ‘Ways to Live Forever’ film – and put together a first draft of the next book.

Our wedding was rather relaxed – we had a Quaker wedding in a little seventeenth-century meeting house in Yorkshire, followed by a barbeque in a field with a keg of real ale, a band and a bonfire. Molly would have greatly approved. (Sam would have liked the fire-eater and the marshmallows, but probably found the rest of it a bit dull).

The ‘Ways to Live Forever’ showing, however, was anything but relaxed. I’d seen a few scenes from the film already, and was a little freaked out by how much they looked like the inside of my head – a little like hearing someone read your work out loud, or act out scenes from your diary. I was thoroughly expecting to watch the film in an agony of embarrassment, curling my toes and muttering “Oh God, did I write that?” and various other authorly agonies.

Fortunately for my peace of mind, the film – while sticking very closely to the plot of the book – was different enough that I didn’t know what was coming next and could watch it as an audience member and not an author. Of course, it was still a very odd experience. It’s been three years since I read the book all the way through, and I’d forgotten how personal a story it is – how much of it comes from stories my mum used to tell me, or things my brother and I used to do, or dreams and ambitions my friends and I had. ‘Ways to Live Forever’ is a fictional story but it has a lot of my childhood in there too, and it was a little surreal to see that projected onto a cinema screen in the BFI.

Another thing that was odd was the film’s colour scheme. When I wrote ‘Ways to Live Forever’, I wanted it to be a sturdy book. I was aware that it would be all too easy to end up with a pale, wistful, faux-poetic story about butterflies and flowers and white-faced children in hospital wards, and I knew that wasn’t the book I wanted to write. I wanted it to be about real children living in the real world – watching real films and playing video games and painting Warhammer models. Sam and Felix and Ella all had deliberately solid-sounding names for that reason. And although I never mentioned this to the film-makers, they’d obviously picked up on it because the colour scheme for the film is all bright, primary colours. Even Sam’s bedroom View this Posthas a very sturdy feel to it – just like I’d imagined.

The film is coming out on the 29th of October in Spain. It has a website here, where you can see the Spanish trailer and some photographs from the film. I still don’t know when it’s coming out in Britain, but probably not until the new year. Keep coming back here for more news.

Tom and I are now based in Oxford, at least for this year. ‘Season of Secret’ is all set to be published in America in January, and you can already pre-order it on Amazon.

I’ve finished a first draft of the medieval book, and am waiting to see what my editor thinks of it. It doesn’t yet have a title, home or release date yet, so do hold it in your thoughts.

For those of you who haven’t found me on Facebook yet, I’m still here. Snippets you get if you follow me include pictures of all the foreign covers, and a very early first chapter of ‘Season of Secrets’. If I get 500 people liking me, I’ve promised to put up early versions of ‘Ways to Live Forever’, so do follow me if you’re studying or reading the books.