Season of Secrets, Films and Prizes

First exciting news is that the mass market edition of Season of Secrets is now out – hurrah! Not only is it cheaper than the trade paperback (and will look very pretty on your bookshelf next to the photographic ‘Ways to Live Forever’), but it has a very nice quote on the front from none other than Jacqueline Wilson saying how much she liked it, which is a little surreal for me, as I grew up reading Jacqueline Wilson. Jacqueline liked ‘Season of Secrets’ so much that she sent me fan mail telling me how good it was, which was bizarre and exciting and utterly wonderful. It has also been shortlisted for the Manchester Book Award, and longlisted for the Stockport Book Award and the UKLA Award. It’s on 3-for-2 in Waterstones at the moment, so do check it out, if you haven’t yet. 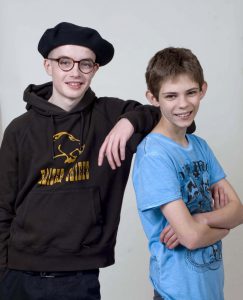 If you’re looking for news about the ‘Ways to Live Forever’ film, don’t look here, look here. Filming has now finished, and they’re onto the cutting and sticking and twiddling phase of procedings, but there are loads of pictures of the film up to oogle at (like this one of Sam and Felix) and little videos of the actor playing Felix having his head shaved and the director saying how much he liked the book and other fun stuff to waste an afternoon over. Do go and check it out. It is very, very, very wonderful.

Ways to Live Forever also won the 2009 Stockport Book Award – hurrah! Stockport students had a wonderful time making some impressive artwork based on the book and on Sam’s list of things to do – I’m hoping to get that up on the website soon.

I’ve also started work on another book three. Don’t want to say too much about it yet, except it’s going to be a bit historical (okay, very historical, it’s set in 1349, and I’ve already killed seven major characters). I’ll keep you posted on it!

Hope this year brings you all good things – lots of books to read, places to travel to, friends to make and new things to discover.