Next, Independent Booksellers, Festivals and Film

Well, it’s been a while, so apologies for that as ever. A few of you have been asking about the film of Ways to Live Forever. The Spanish version is now out on DVD (please note that this is Spanish only and does not have an English version), as is the Taiwanese version. You can buy the film in English on DVD if you live in Australia or New Zealand, but sadly not yet in Britain.

If you live in America, however, then I’m thrilled to announce that the film has been bought by World Wide Motion Pictures, and should be in cinemas in early 2013. Hurrah! I hope you’ll be able to wait that long.

All Fall Down is out and seems to be doing nicely. I’ve also bought a house, which is very exciting – I’ve been busy painting walls, sanding floors and planting things, as well as working on the next two books.

My very short book for Barrington Stoke is finished – it’s called A Lily, A Rose and it’s another historical novel, set about twenty years before All Fall Down. It’s about a fourteen-year-old girl who is told one day that she has to marry a man in his forties, and what she decides to do about it. It should be out in spring 2013.

I also have a short story in the anthology, Next, edited by Keith Gray. Next is a collection of stories for teenagers about the afterlife. There are some big names in there, including Keith Gray, Frank Cottrell Boyce, Malorie Blackman, Jonathan Stroud, so it’s worth reading in its own right. You can read some more about my story on the Books and Stories section of the website. 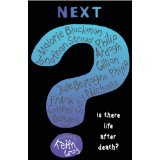 I’m going to be appearing in several festivals this year. I’ll be at the Edinburgh Book Festival with Katheryn Erskine on the 25th of August (and in a school’s event with Keith Gray and Kate Harrison on the 24th August), the Cheltenham Literary Festival with Marie-Louise Jensen and Mary Hooper on 7th October and the Northern Children’s Book Festival in Stockton on 24th November. I hope to see some of you in the audience.

Phew! And now, if you’ll excuse me, I’d better get on with writing the next book …